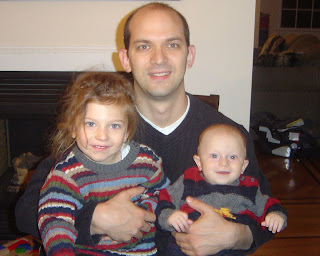 Well I started this month off with a bang by posting a couple of times a week, but it has quickly gotten hectic. I have been doing my best to both post and practice but with a new (and colicky) baby at home, it can be kind of rough. The last few weeks I've intended to go to practice on Monday and Wednesday nights, but on each Monday I get greeted with a 3-minute voicemail of a screaming baby - which precludes me from going to Wednesdays practice. I told my wife that I need the extra practice for the next few weeks for several reasons, the least of which is my upcoming Shiai this weekend (I will post results right after). I hope I do well, especially because I've been thin on practicing. The last few weeks have been really hectic. While my nights have not quite been sleepless thanks to my loving, and awesome wife (who lets me sleep because I need to go to work, and because I don't have the 'equipment' to feed our son anyways), I have definitely been running on much less sleep that usual. But nonetheless, I am still working out almost every morning and managing to go to Judo class. I have gained a lot of mental toughness over the past few months. I am not sure why or how, but I am starting to find ways to work through the weak spots. Which leads me to the picture above.

That picture is from October of 2004 - 3 years ago. I had long forgotten about this picture (even though its my avatar at the Judo Forum), but the website I had posted it to was going out of business, so I downloaded all of those pictures to my computer, and there it was. At the point that this picture was taken, I was just about at my goal weight of 195 lbs after coming down from 230! I looked good (if I don't say so myself). I was on the south beach diet at the time, and I was also going to Judo twice a week consistently.

This past summer, I promised myself, and my readers, that I would lose weight. But unfortunately, Instead of making a big splash, I've only made a small ripple. When I wrote that post back in the summer, I was 218, this morning I was 210 on the same scale. Nonetheless, I haven't been sticking to what I promised myself - to lose weight.

Between the picture, discussions with my wife, and just looking at the scale and in the mirror every morning, I've made the determination to get back down to the 190-195 range. Although a time limit would be nice, I am not going to do that.

I will just keep working at it until I get there. Working out every day, going to Judo as often as my wife and screaming son dictate. And I've been working at this for a couple of weeks now. Although I've only dropped a pound or two, I surprise and please myself when I able to pass over the snack cabinet, or forgo a sports drink for water or seltzer instead. I feel that even though my mental toughness regarding my weight had lapsed, my overall mental toughness has grown. I don't give up as easily, I have found my inner voice that guides me. Whether its telling me to keep on going in a 20 minute Randori session, or if its helping me keep my cool while calming down an inconsolable, screaming child at 1am, it is there. Yes, we all have lapses in judgment and get frustrated (I did in Judo a week or two ago, and was swearing like a sailor), I still think that I am a lot tougher now than I was three years ago, and a lot of it has to do with Judo.

Life needs to be attacked! Constantly! Being passive might help for a few minutes in an argument, but it is not a long-term strategy. In life, no one is going to give you a Shido for stalling or for being too passive - you need to be your own referee. You need to attack life. Finally, after all these years, I am starting to understand it.

Unknown said…
Hey tubby! ...if you don't lose that weight, I'm going to drag you out to Denver and make you fight in my weight class at the Brian Olson Classic next Saturday. :P