How do you say Nachas in Japanese? 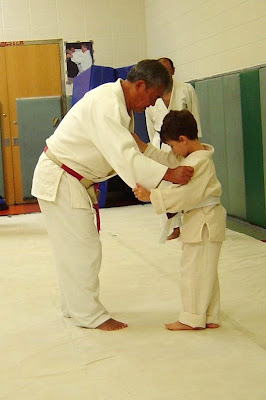 Nachas, is a Yiddish word which loosely translated means 'parental pride'. What relevance does this have to Judo? Well, yesterday my oldest took his first Judo lesson, and I have enough Nachas to fill a size 8 Judo Gi!

In the picture at right, my Sensei is teaching my son how to grip, as a precursor to learning O-Soto-Gari. I was such a happy dad yesterday, as he put on his gi and started to learn. While he showed moments of frustration (i.e. when he didn't get the throw concept right away, or when he lost in Sumo wrestling), there were enough bright spots - a couple of sumo wins, 'throwing' sensei, and even a 'win' in Randori (thanks to a very nice orange belt).

The highlight for me was him using Ko-Soto-Gake in Randori, even though he was only taught O-Soto, O-Goshi, and Ippon Seoinage!